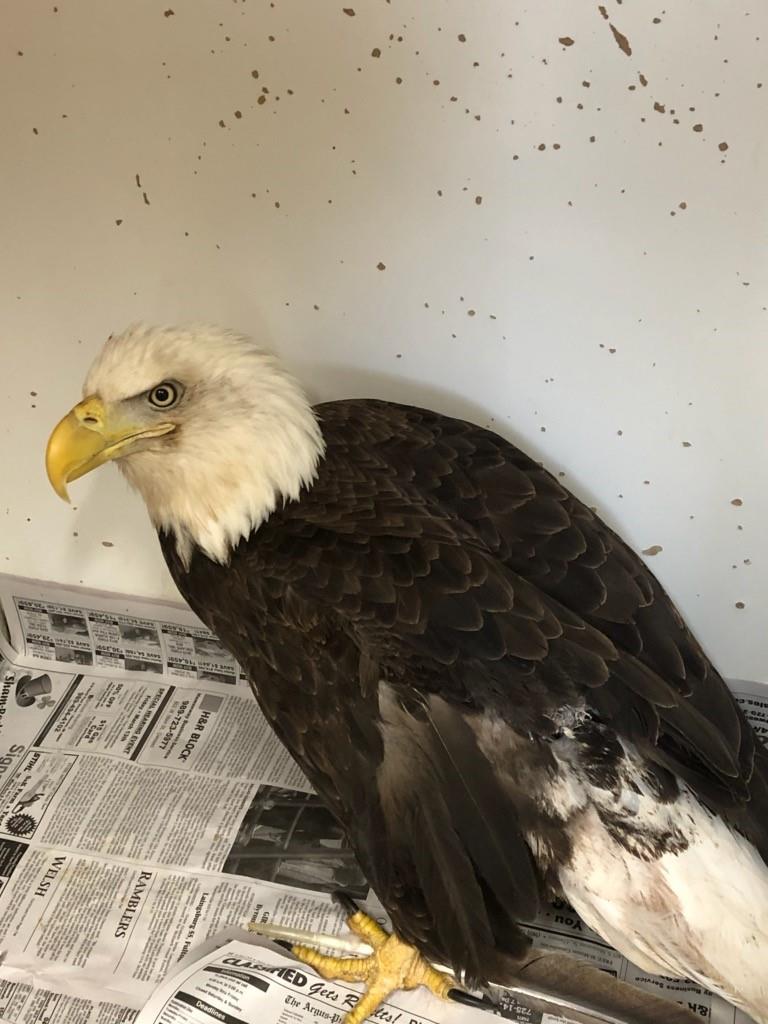 Welcome to the Doctors’ Blog! My name is Dr Karen Hinkle DVM . I have an interesting case that I thought I would share with everyone. We work with the tireless volunteers at the Wildside Wildlife Rehabilitation Center in Eaton Rapids when they need us. This time they called my associate Dr Bauer for an injured adult Bald Eagle that a farmer had found in his field.

When she examined the bird, she saw a large wound in its left wing. radiographs were taken of the entire bird. It was found to have a fractured “elbow” (between the humerus and ulna/radius bones). The end of the ulna was missing and there was evidence of shrapnel in the wound. It appeared that someone had shot the Bald Eagle in the wing. The volunteers there asked if we would help repair the bird as he would have to be euthanized if we could not do anything. They had asked everywhere and the doctors who usually do this for them were not available. I have very little experience doing surgery on large birds but we were willing to try. We believe this bird is a male because he is a bit smaller than others at the sanctuary and male Bald Eagles are smaller than females. The injuries to the wing were too severe to repair. The wound was very large and infected.

I found information on amputation of the wing of a large bird. We had to get permission to do this repair as he would never fly again and there are rules to keeping him in captivity forever. He seems to be a gentle bird. He does not seem upset when we work with him. He likes to eat the rats they feed him, as long as they take the skin off first! These things make us think he will do well in managed environment. We were given permission and we performed the wing amputation. The surgery must be performed quickly as there can be danger to long anesthesia times in a bird. Our staff had to prepare the surgical site by plucking feathers not clipping fur! The surgery went well. Our nurses monitored him during anesthesia .

We removed the damaged end of the wing in record time for having never done it before! We used special local anesthesia blocks so that there would be no pain on the stump left behind. As he was recovering our nurse Allegra had to hold him upright for over 30 minutes so that he could breath normally as he came out of anesthesia.

He recovered very well. We had a lot of questions after surgery. We were not sure he would leave the area alone to heal. We gave him a backwards Elizabethan collar that you can see worked just fine.

He had great healing. He had no surgical or infectious complications. We were not sure that there would be proper feather growth so that the stump would be protected with feathers. Here you can see they grew back just fine.

They call him “Brave”. I hope that when they place Brave in an educational setting, he will bond with a female bald eagle.

They can raise baby eagles that will fly free in the home of the Brave.